BCG growth-share matrix is a business framework that helps companies analyze their business units (i.e. their product lines) or any other cash-generating entities by their degree of profitability.

To show how you can use the matrix for your business, let’s analyze e-commerce leader Amazon, specifically four of its products: Amazon AWS, Amazon Video, Amazon Live and Amazon Echo with Alexa.

Before placing each of these products in one of the four quadrants of the BCG growth-share matrix (i.e. cash cows, question marks, dogs and stars), we need to gather the latest information on market size, product market share and market growth rate. 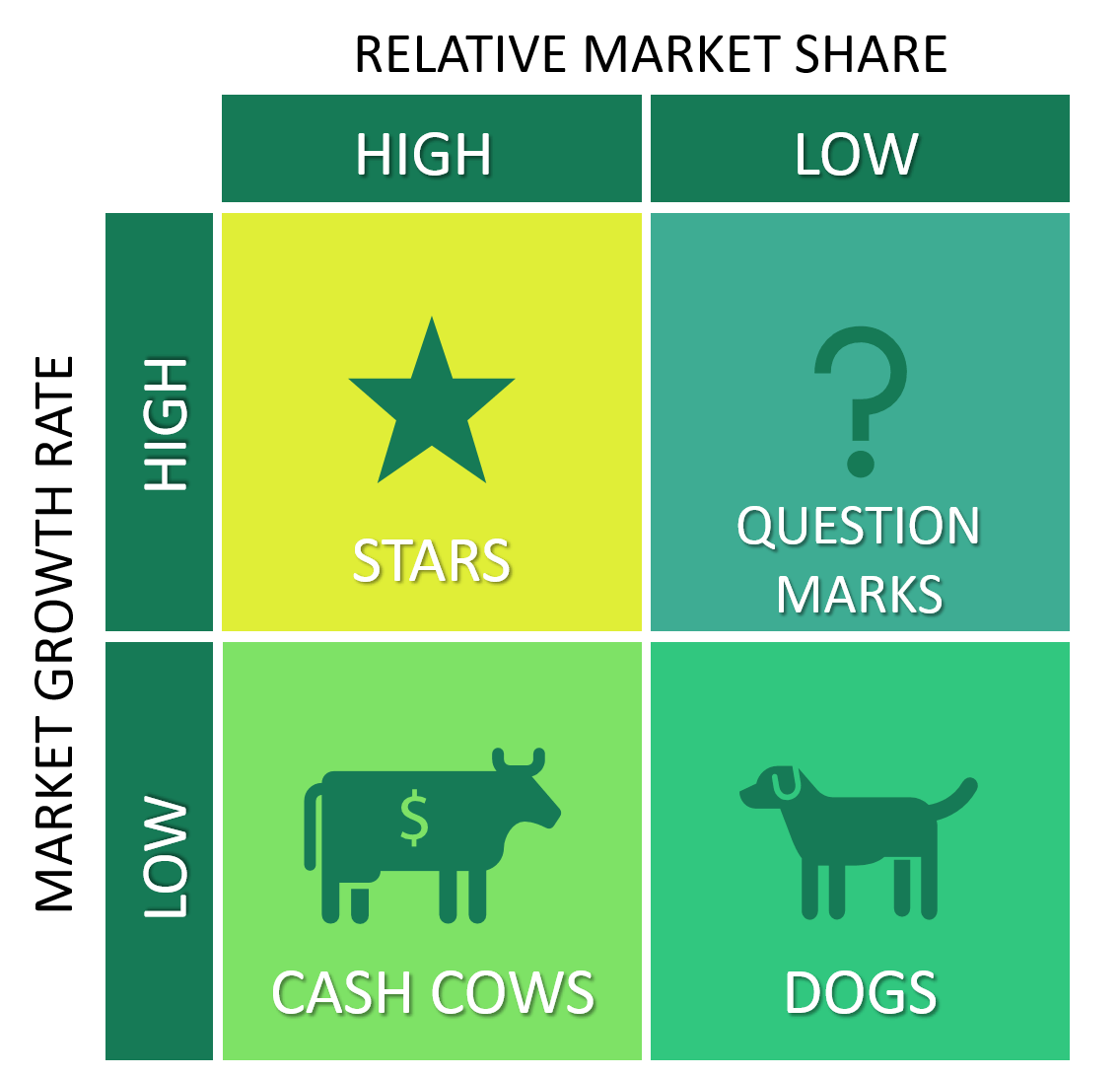 AWS has 33% of the market, followed by Azure at 20%, Google at 7% with Alibaba Cloud close behind. 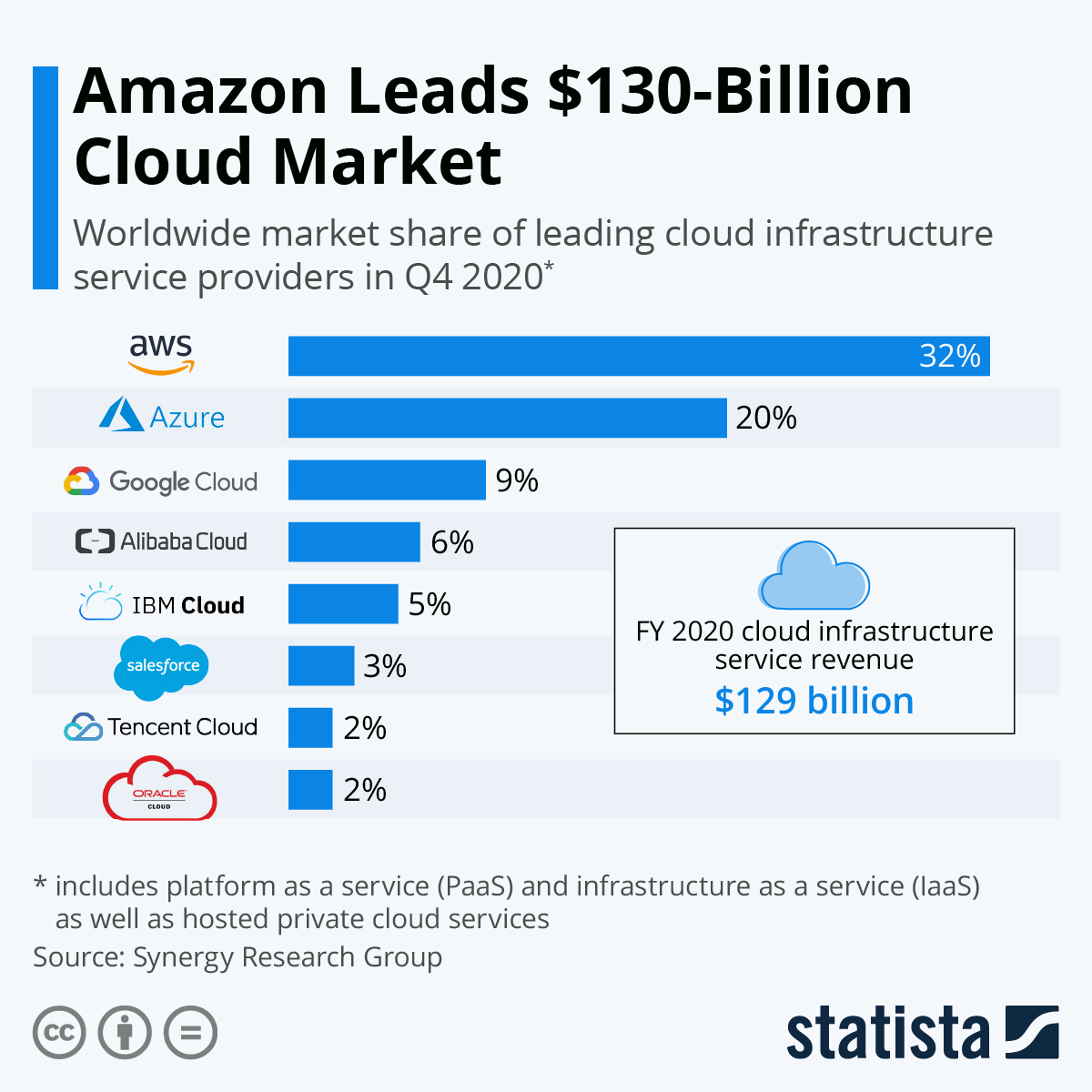 According to the latest reports, the global cloud computing market is expected to grow by 14.9% annually. 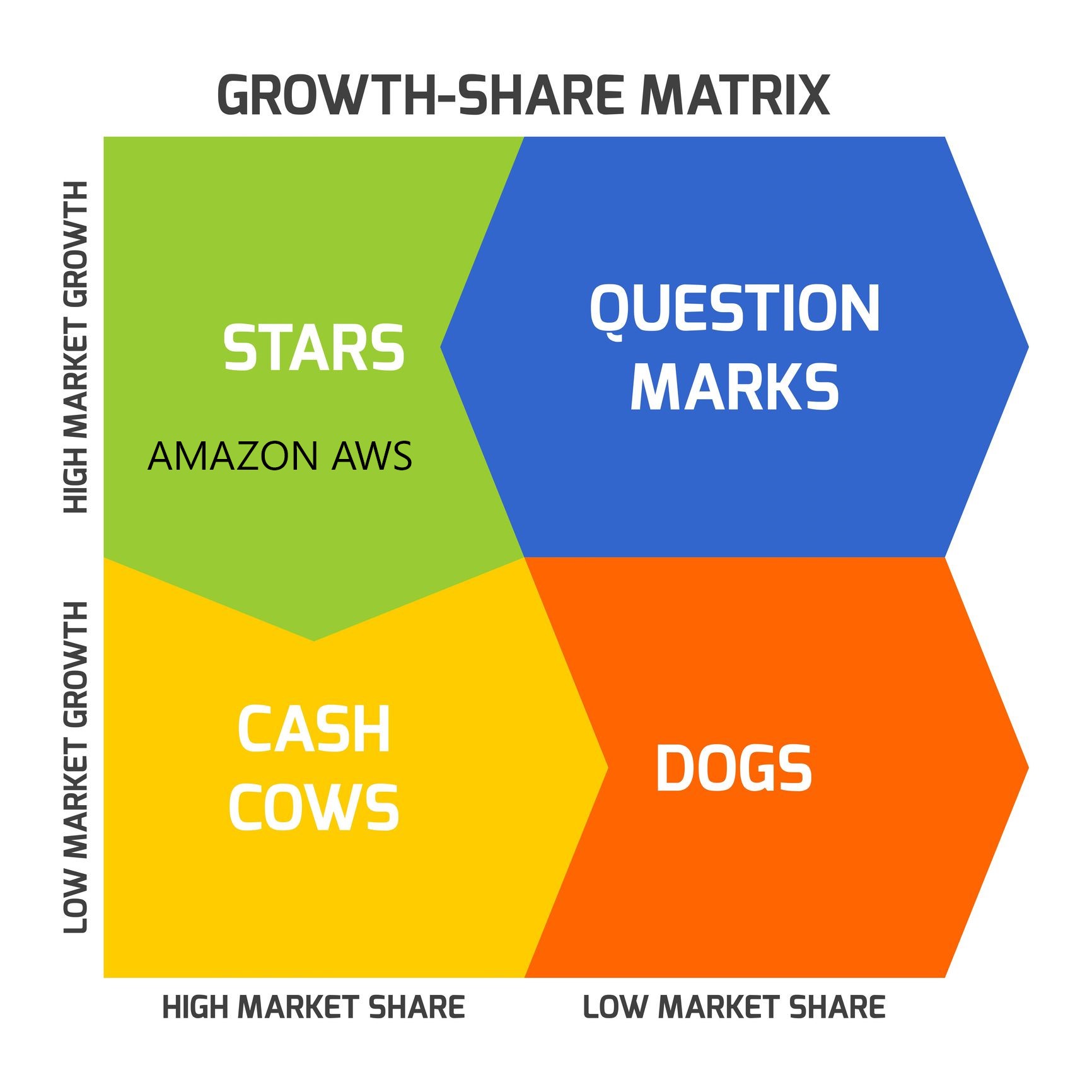 According to Statista, revenue in the video streaming market (SVoD) is projected to reach $71 billion in 2021.

In 2021, there are 1 billion users of video streaming subscriptions. 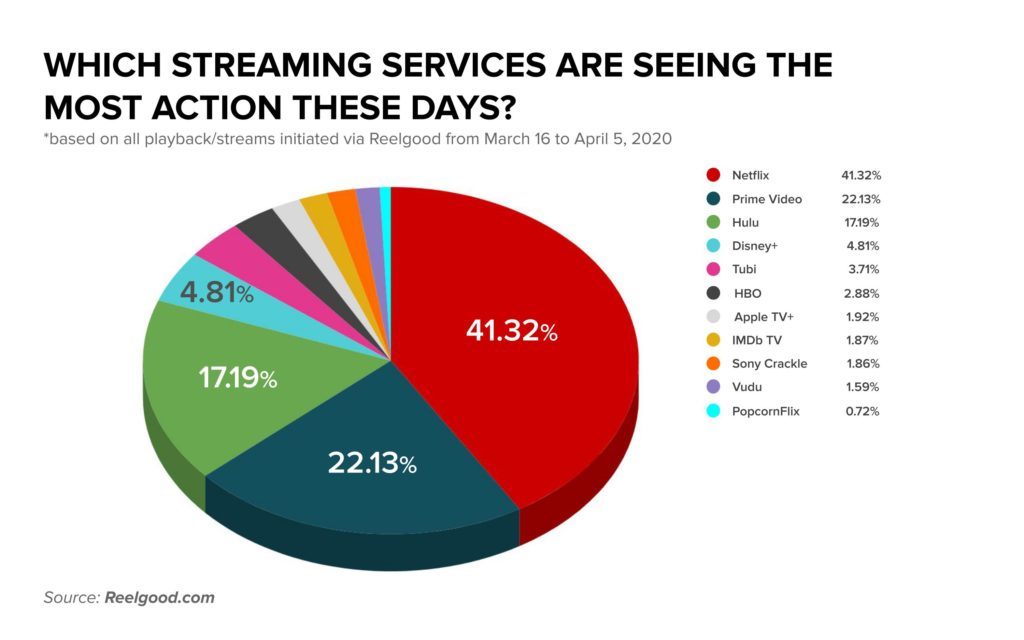 As of January 2020, there are 150+ million Amazon Prime Video users.  The service is available in over 200 countries internationally.

According to Forbes, in 2020, due to people spending more time at home, Prime Video service emerged as another big player in the streaming wars climbing rapidly in the top 3 global video streaming service providers to a 22% market share. The company had announced plans to spend $7 billion on content last year. 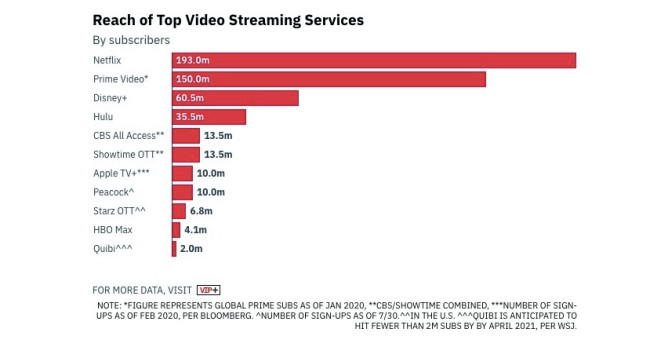 Netflix, the leader of the market, jumped to over 200 million streaming subscribers in 2020 and unsurprisingly, announced a $16 billion budget for new content. Total Netflix 2020 revenue came to $25 billion, up from $20 billion in 2019.

Revenue for the global video streaming services market is expected to show an annual growth rate for the period 2021-2025 of 11%, resulting in a projected market volume of $108billion by 2025.

The latest reports submit that in 2020, Prime Video subscriptions accounted for 23% of SVOD subscriptions, a sharp increase from its previous 14% last quarter (source).

Amazon Video has been growing steadily over the past few years and in 2020 the number of subscribers received a boost. Currently the 2nd most popular video streaming service provider, Amazon Video has still a long way to go and a lot of money to invest. According to the BCG growth-share matrix, Amazon Video is a star. 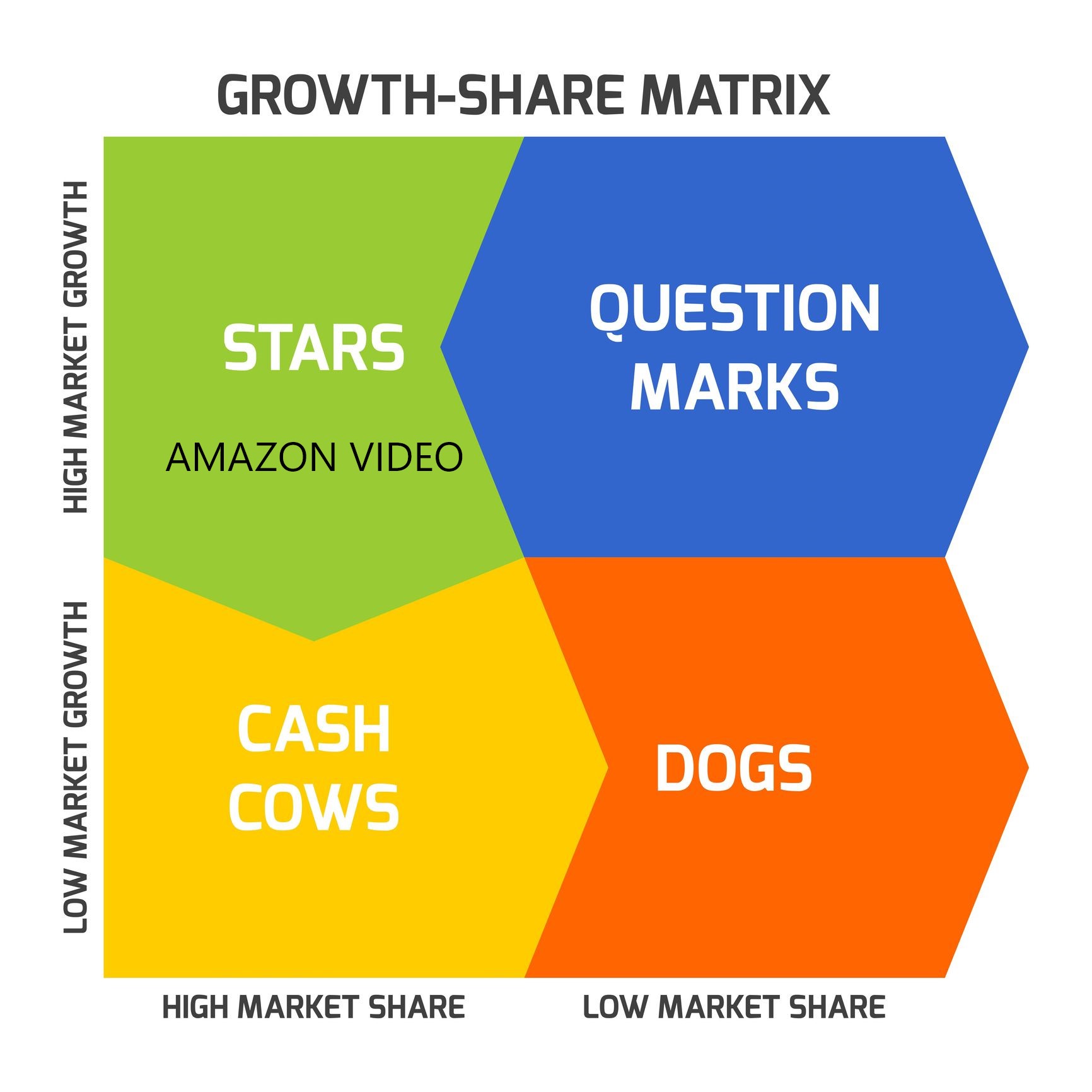 Amazon Live is a live streaming service that allows sellers to “promote discovery” of their products by hosting their own livestreams for customers on Amazon.

According to data from Sensor Tower, Amazon Live was released in February 2019. 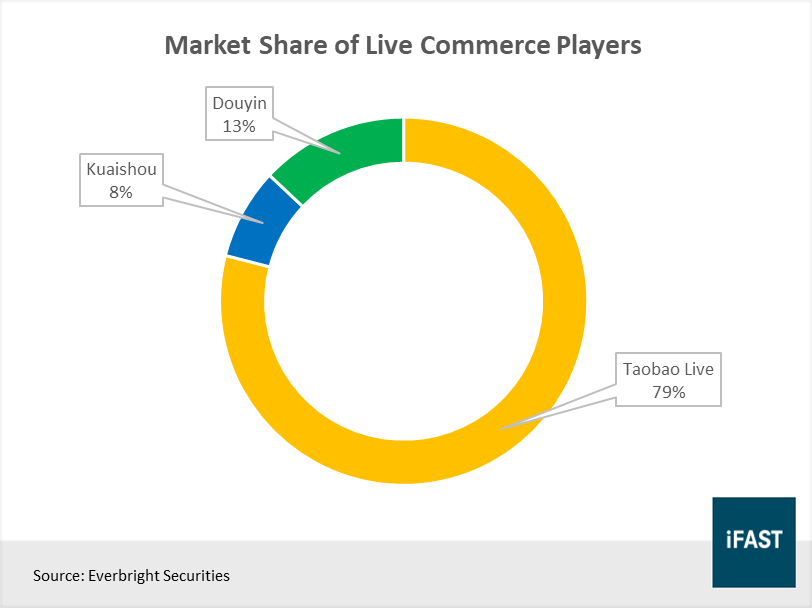 Live-streaming is rapidly transforming into a standard feature for e-commerce. Taobao’s live commerce surged in 2019, achieving a growth rate for live-streaming-prompted-sales of over 150% for three consecutive years, making it the fastest growth model of e-commerce globally. In China, the latest reports show that the live commerce market has reached $66 billion in 2019 and is expected to double in 2020.

During last year’s Singles Day, Taobao saw an increase of more than 220% in the number of merchants participating in live streaming over the past 12 months. Gross merchandise value (GMV) sold during the 2020 Singles Day reached $74billion (source).

Amazon Live is just starting out so I couldn’t find statistics related to its market share.

Sales from live streams are expected to grow globally more than 100% in 2020 vs. 2019 (source). Although live shopping has been reported to increase sales, Amazon hasn’t released any statistics on how many sellers use its Live platform yet. To be on the safe side, let’s assume the live platform to have a low market growth.

Live e-commerce is growing exponentially. Remember the internet boom in the early 1990s? This is the stage we are at with shopstreaming and China is the spearhead. With a low market share and low market growth, in a hyper-growth market, Amazon Live is a question mark type of product. With the right resources and strategy, Amazon Live could transform into a star. But if the market conditions are not assessed correctly, it could downgrade into a dog type of product. 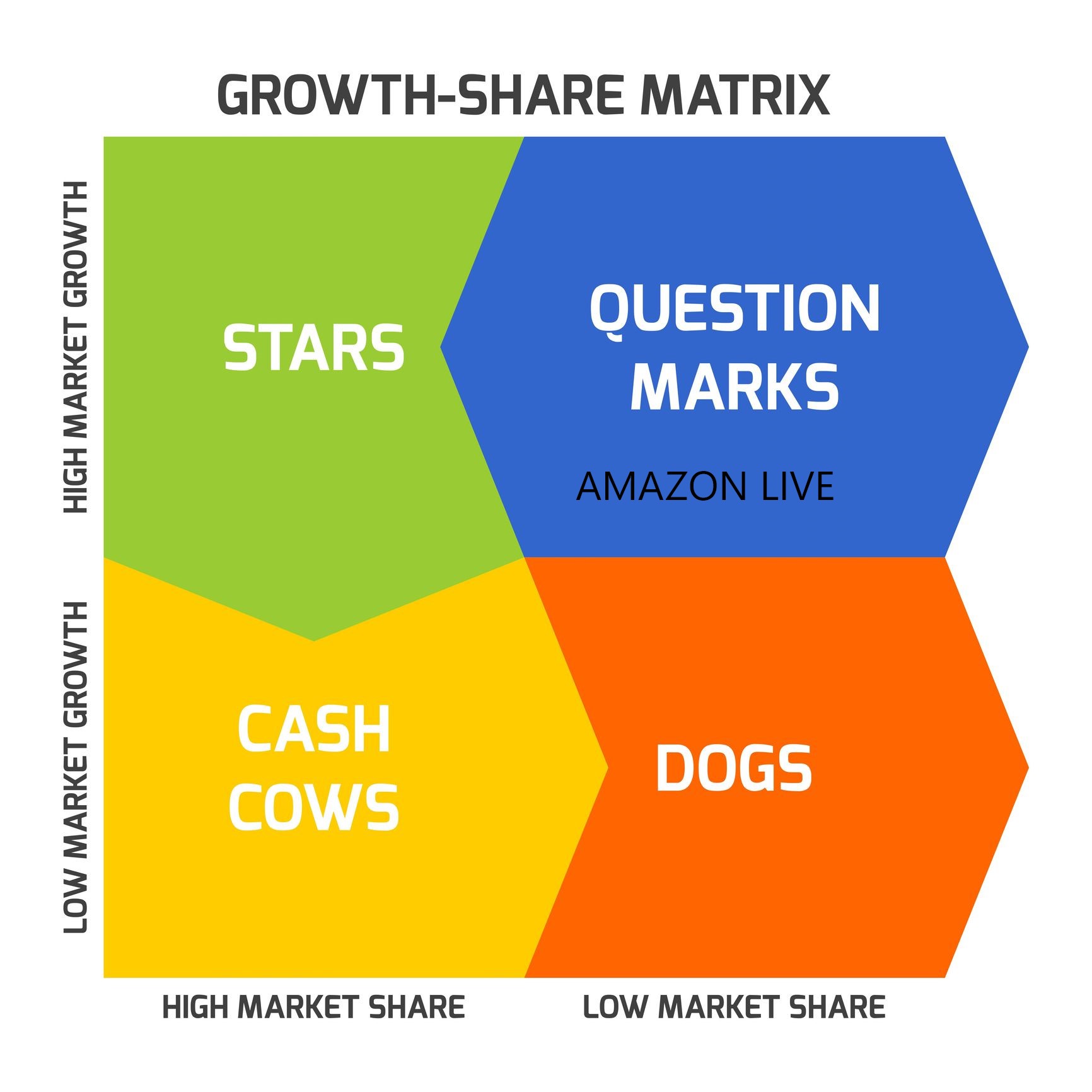 The Amazon Echo with Alexa, the virtual assistant is a smart speaker.

In January 2019, Amazon’s devices team announced that they had sold over 100 million Alexa-enabled devices.

Amazon generated about $1.4 million in Alexa “skill” revenue in 2019 — about 25% of the forecasted $5.5 million. Despite its success with homeowners, Amazon Echo with Alexa is yet to prove a financial success. 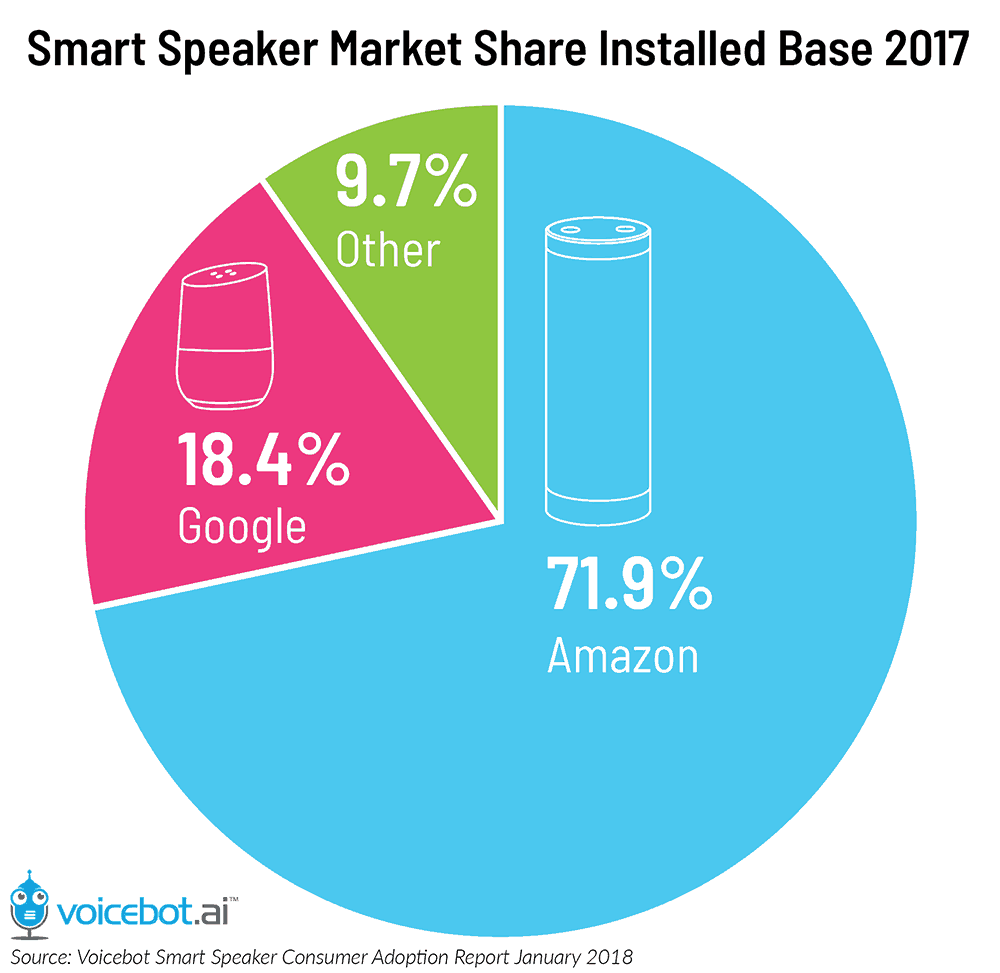 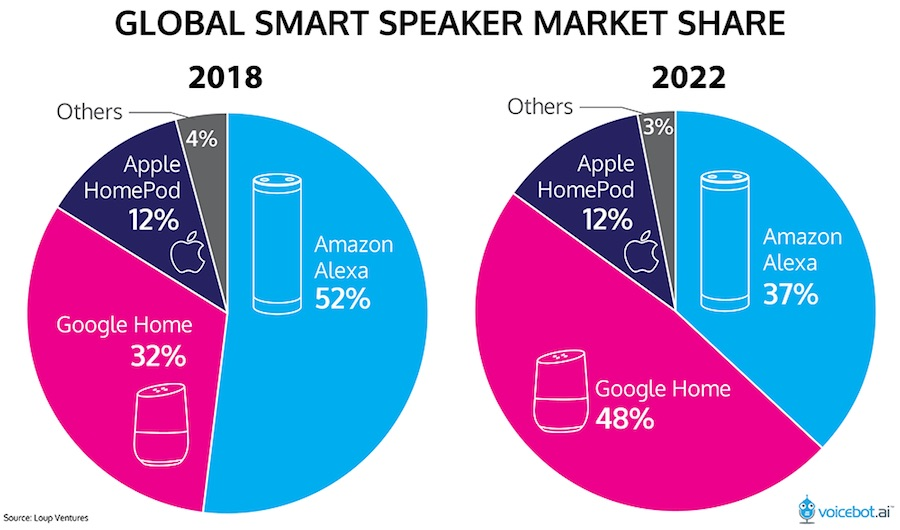 Amazon was the leading vendor in the global smart speaker market, having a market share of %21.6% in the second quarter of 2020.

Google is Amazon’s closest competitor, with a share of 17.1% in the same quarter. Chinese vendors Baidu, Alibaba and Xiaomi have become strong players in recent quarters, thanks to growing demand in the Chinese domestic market (source).

The smart speaker market is growing at a CAGR of 32%.

In 2017, Amazon Alexa had a market share of almost 80%. Google began developing and investing in its own smart speaker and gnawing at Amazon’s lead. Currently with a shrinking 21,6% market share, negative market growth and underperforming revenue, in a growing market, Amazon Alexa is a dog type of product. 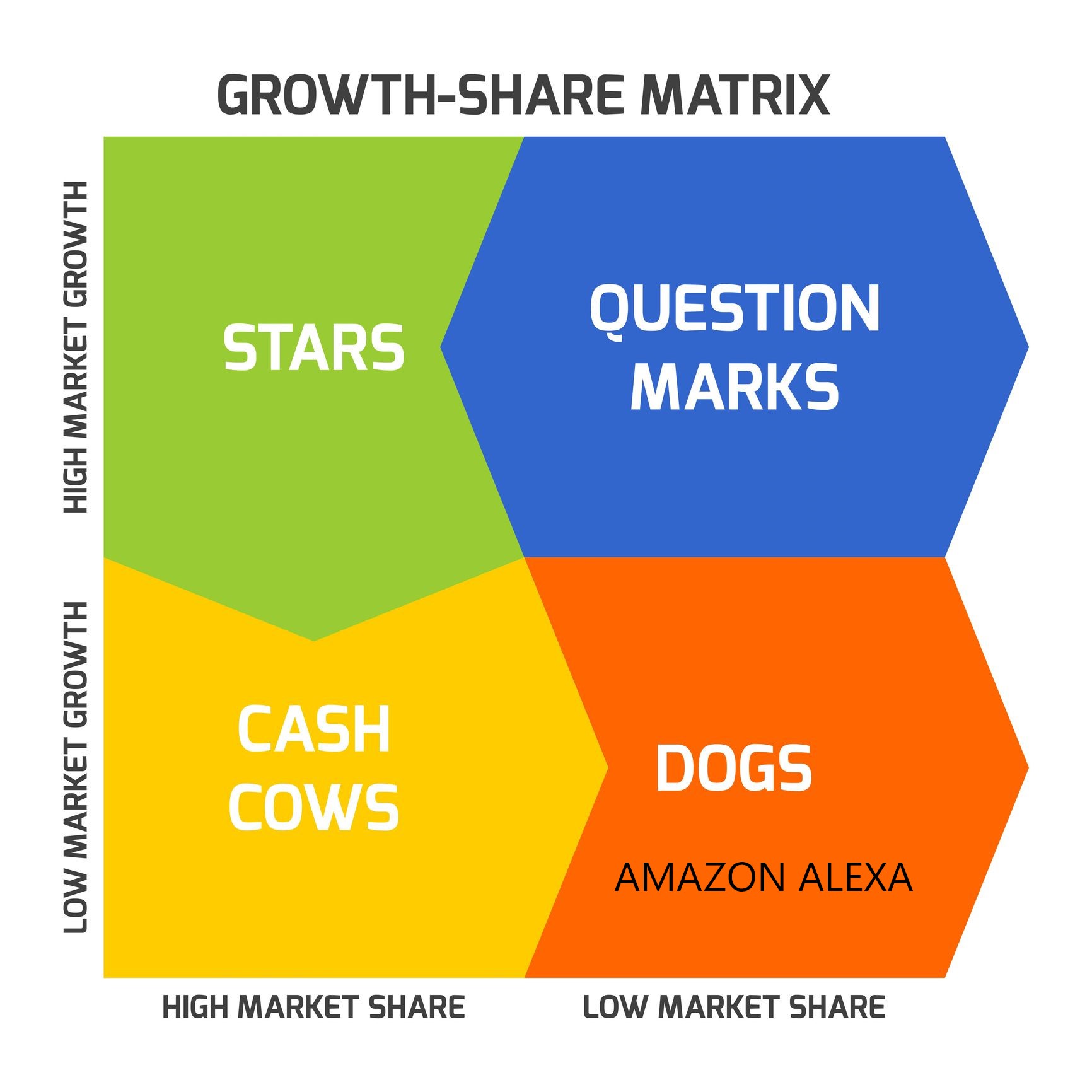 20+ Valuable Marketing Quotes and Insights From Experts (1 of 2)

Michelle Obama – ‘When they go low, we go high’

All You Need To Know About Google Tasks App