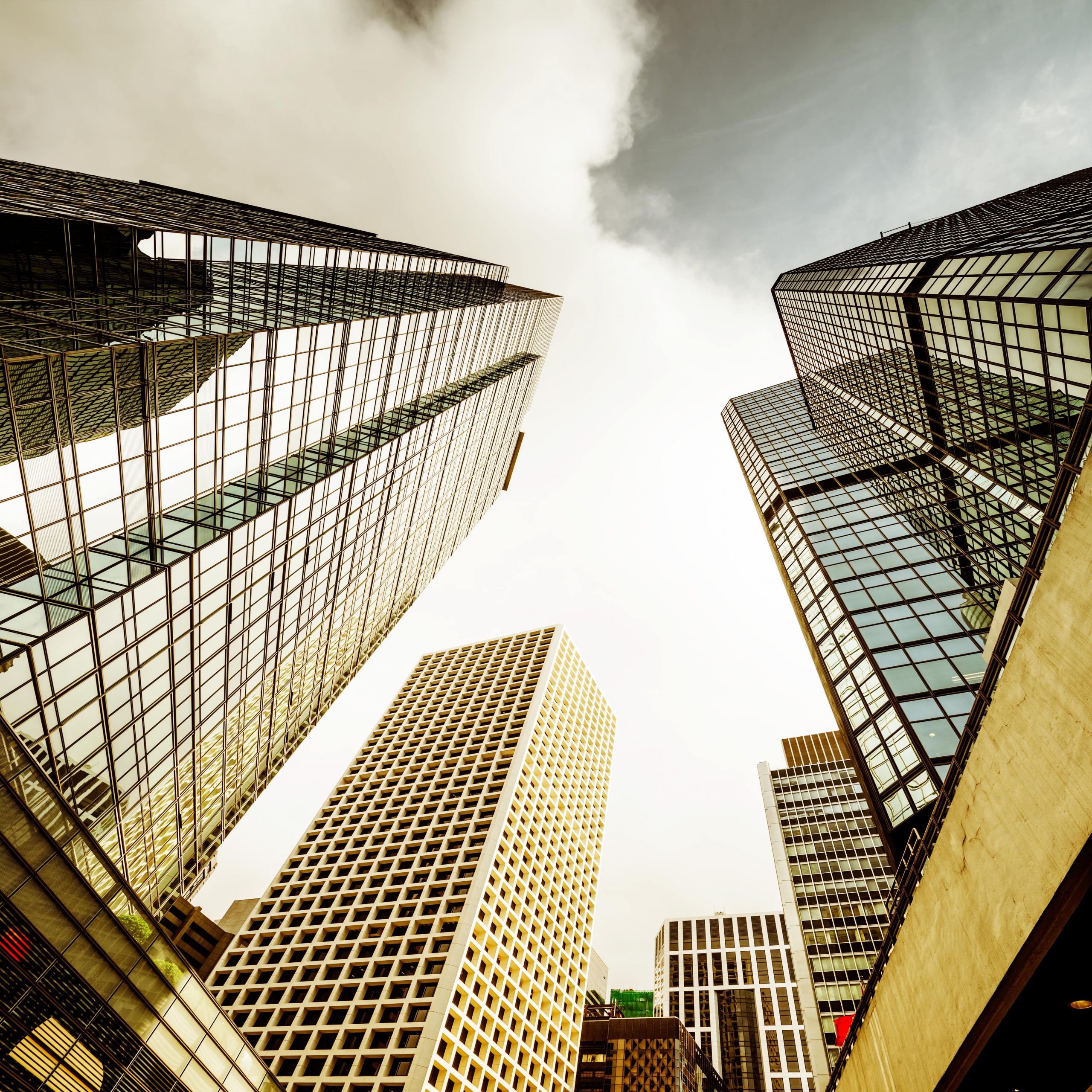 181 CEOs are redefining the purpose of a corporation 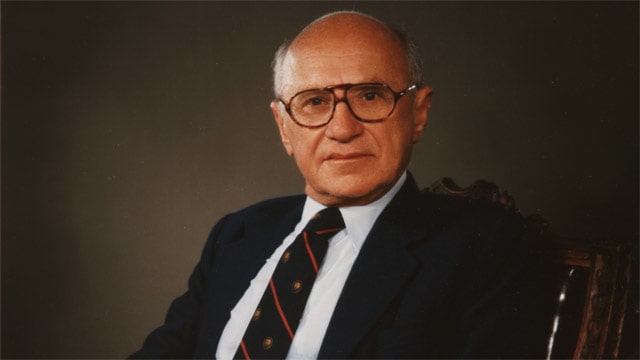 In 1970 the Nobel Prize recipient and economist Milton Friedman published the Shareholder Theory.

Friedman goes on to argue that the business goal of any company is to maximize returns to its shareholders.

In his opinion, a society where companies concern themselves with the community rather than profit is a breeding ground for totalitarianism. The company is not the appropriate agent of social causes, but the individual.

This theory had great influence on the business world and laid the foundation for corporate America, a term which refers to the consequences big for-profit corporations have had on the American economic system and society at large.

Overall, these consequences have been negative. Critics of the theory have talked about how this doctrine has impoverished blue-collar workers while enriching corporate elites, allowed bad conduct and encouraged unhealthy employee competition to reach business targets.

In short, it was a dog eat dog world and it was bad for everyone in the long term. In his book Leaders eat last, Simon Sinek gives a highly researched in-depth description of corporate America and what it meant for the 1980s-early 1990s American society (if you haven’t read the book yet, I highly recommend it).

Since 1978, Business Roundtable has periodically issued Principles of Corporate Governance and statements on the Purpose of a Corporation. Each version of these statements has stated that corporations exist principally to serve their shareholders according to the Shareholder Theory.

In August, Business Roundtable updated its statement on the purpose of a corporation and it was a big surprise to the business environment and the general public.

The 2019 Purpose of a Corporation includes 5 commitments where to the surprise of many, the responsibility to the shareholders comes last.

There are 193 CEOs members in the association and 181 of them have signed the statement, among which the leaders of billion-dollar companies like

The 2019 Purpose of a Corporation – 5 Commitments

Here is the excerpt from Our Commitment, the page which includes the Purpose of a Corporation and features the signatures of all 181 CEOs:

“While each of our individual companies serves its own corporate purpose, we share a fundamental commitment to all of our stakeholders. We commit to:

Each of our stakeholders is essential. We commit to deliver value to all of them, for the future success of our companies, our communities and our country.” 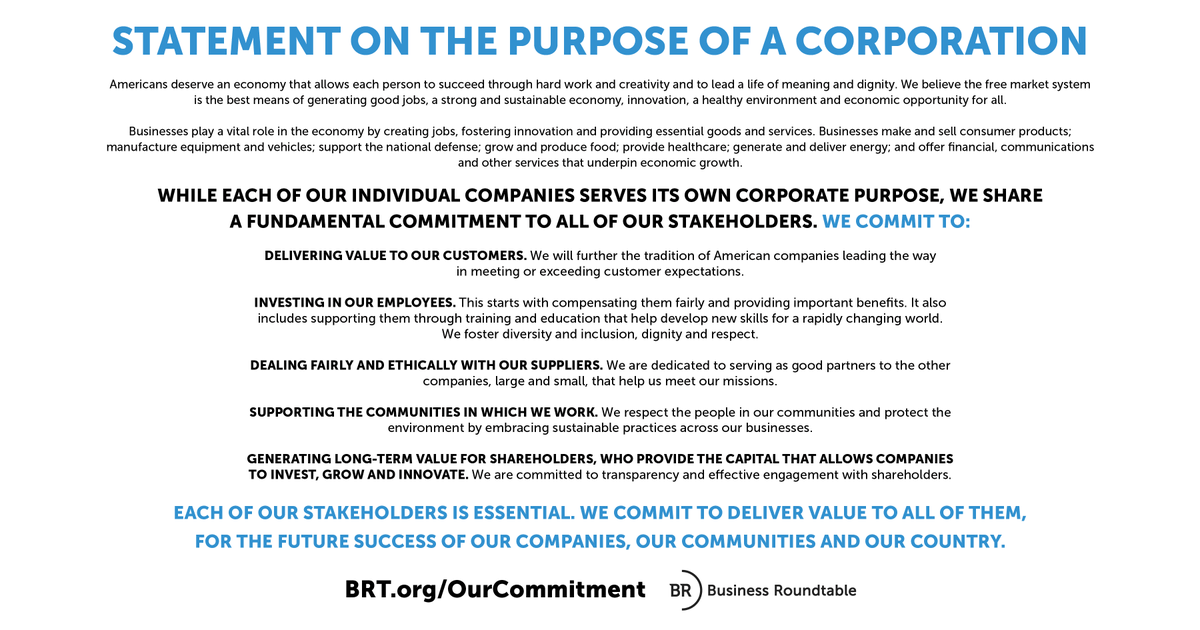 The Purpose of a Corporation / Business Roundtable@Twitter

During the past ten years, the business world learned valuable lessons in management and leadership driven by tech development, societal changes and the rise of digital.

Companies that didn’t adapt to the fast-changing business environment or lead their industry through innovations, no matter how big, have been pushed out of the market.

Other businesses with visionary leaders understood where the world was heading to and made changes which helped them thrive and develop. Some of them early on while others were able to correct in the last moment.

Companies that live by the 2019 Purpose of a Corporation

In August 2018, Microsoft announced they will work only with suppliers which implement the paid parental leave policy within their organisation.

A 2018 Trendwatching report identified a powerful trend among consumers – the concept of legislative brands. Consumers expect brands to move beyond supporting social issues to “using their significant power to call for, promote, and even impose laws that drive constructive change and make the world a better place.”

If they want to still be on the market in the next ten years, corporations have to understand that people are closely monitoring the way they do business now and how their business operations impact the environment, their employees, their suppliers and the world overall.

Matter, a Danish startup, helps citizens choose sustainable pensions. The company provides Danish people with a list of companies to choose from. The list excludes harmful companies that produce weapons, tobacco and fossil fuels, companies that do not respect human rights or are known to be involved in corruption and includes companies that produce climate and environmentally friendly technologies, medicine and healthcare solutions.

That’s a whole different world than the one Milton Friedman envisioned when he came up with the Shareholder Theory!

What is the purpose of your company? What does it commit to?